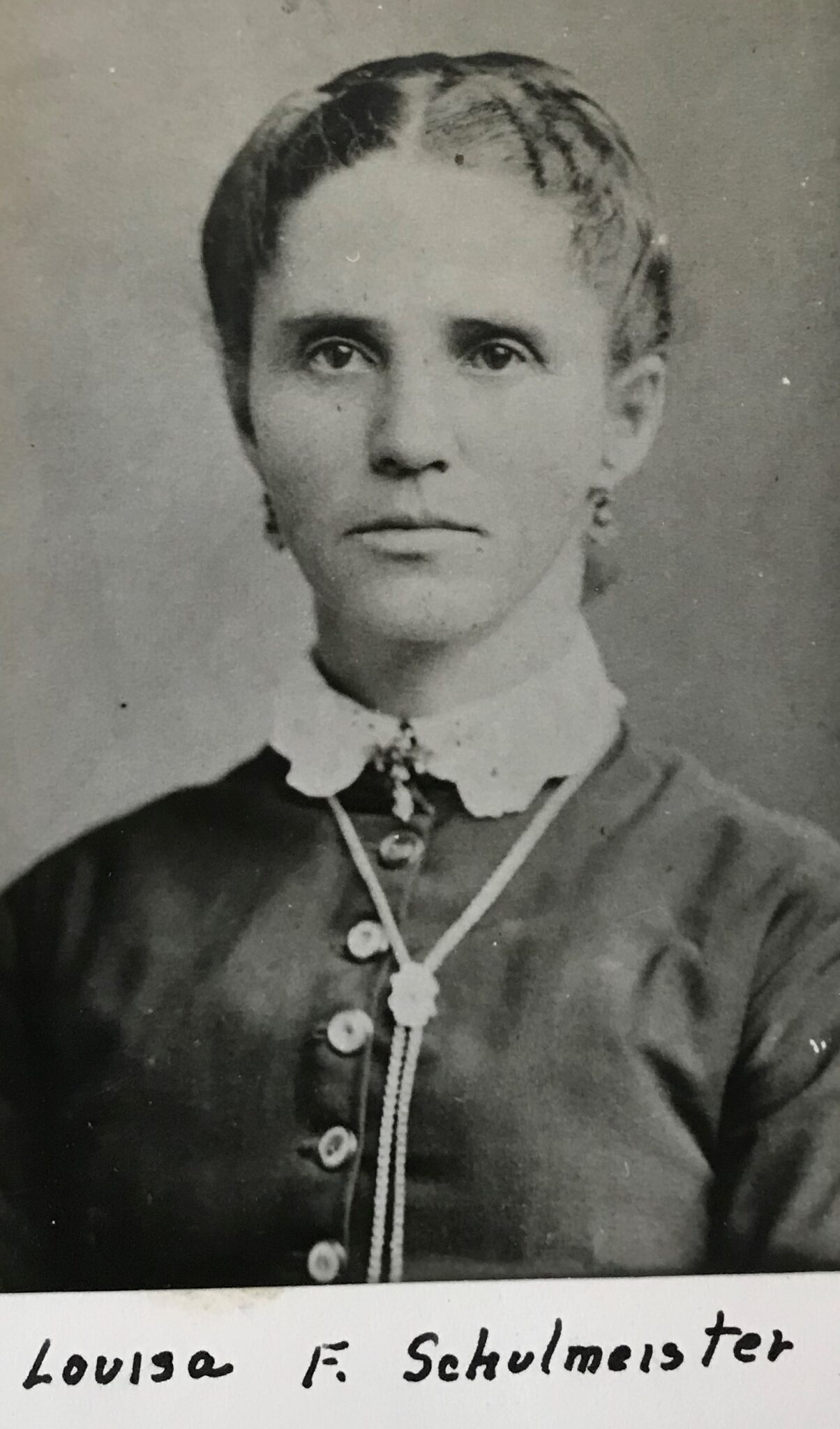 In my lineage of strong women, I am fortunate to have the German ancestors who uprooted themselves to try for a new life on a new continent. They were smart, talented, capable, and people of good heart. They were, in many respects, ordinary people. They worked hard, suffered disappoints, had to cope with disease, death, financial hardships, and overwork. But they persevered, found joy in daily activities, and built strong families. Here is the story of Louisa.

In the 1840s, all you had to do was get here. After that, you could work, own land, run a business, participate in community life without repercussions.

Louisa Schulmeister came as a child with her parents in the 1840s from Alsace Lorraine. They settled in Philadelphia with other German immigrants, possibly in Germantown (hence the name). Her father was a cabinetmaker and continued his work with wood once the family came.

It was in the mid-1850s when she met another German immigrant, Wilhelm Rotthouse. Wilhelm had come to the United States as a young man and soon found his way to other German families who helped him find employment in a nursery in Philadelphia. In 1859, Louisa and Wilhelm married and moved to Wilmington, Delaware. They had a plot at 5th and Monroe, which was considered an agricultural section in the 1860s. the Beers 1868 atlas shows an empty plot with no houses. So, we do not know exactly where they lived or which corner was theirs.

They ran a nursery along with growing vegetables, and had children. By 1868, the doctor advised them to move to higher ground. Their oldest girl, Anna, was not well, and their third child, George, had died at two months. They found a farm on the Concord Turnpike that suited them, and they moved to the higher elevation of 165 feet above sea level. The younger children all seemed to do well there.

They called their farm “Cherrywood,” for the many cherry trees that grew there. It was located right by Concord Turnpike, next to what is now Aldersgate Church. The one-room Sharpless School (later Sharpley School) was located right at the corner of the farm. The farm originally had a large log house on the property where the family lived.

The Rotthouses worked hard to be part of the community. Wilhelm anglicized his name to William, and Louisa (known as Louise) was busy with all of the usual activities of a farm wife: tending the garden, making sure the children were educated, tending the flower garden, cooking, sewing, and on and on. Louisa’s mother lived with the Rotthouses at the end of her life.

Louisa was an integral part of the farming business. Her English was always better than her husband’s and so she was the face at the farmer’s market. She helped with the sale of the cherries to dealers in Philadelphia. She helped prepare produce and flowers for the farmers market in Wilmington. It was great for Louisa that the school was close by, for she valued education and made certain her children excelled in school.

Louisa and William also valued music and art. At least three of the children—and I suspect all of them—learned to play violin and piano. William, Charles, and Harry all played well enough to provide the music for square dances or at programs for the Grange activities. Harry met his future wife, Mabel Talley, at the Grange when he was fiddling for a square dance.

Louisa and William encountered financial difficulties with the result that their farm had to be sold to settle the debt. They had a good friend in the community, Dr. Derrickson, who purchased the farm and then sold most of it back to them for the same price per acre ($20) that he had paid.

Louisa and her family were active members of St. Stephen’s Lutheran Church in Wilmington. They participated in Sunday School, church, dinners, celebrations, building drives, and every facet of community life.

Louisa’s mother, Christina Allinger Shulmeister, lived with the Rotthouses for several years before she passed away in 1882. Multi-generational households were usual at this time. Louisa had five young children in the house by this time, so we can hope that her mother helped with childcare while Louisa helped run the farm.

Louisa helped sell the cherries, tend the garden, sold produce in the King Street farmers market, sewed the family’s clothes, preserved the harvest for winter consumption, made sure the family went to church, taught the children music. She made sure her children were well educated.

Her oldest son, William, owned a plant nursery in Rehobeth. Louisa’s second son, Charles, operated a blacksmith and carriage repair shop across from Blue Ball Tavern. Her youngest son, Harry, brought his wife, Mabel Talley, back to Cherrywood Farm to run the farm.

It was then Harry and Mabel who tended Louisa and William in the last years of their lives. Both suffered strokes in the year before they passed away. Mabel and Harry then juggled childcare and farm-care while tending to Louisa and William. Rachel Rotthouse Webster remembered her grandmother Louisa was ill for many months and that Grandfather William was “quite old” and frail. Louisa passed away in March 1912 and William just three months later in June.

Louisa was much loved by her family. She was the center of a busy household and made sure that her children were happy. Here is what her granddaughter, Rachel, wrote:

“Both the Rotthouses and Talleys worked hard, had many disappointments, and all was not always rosey. However, with much fortitude, a bright outlook, and a sense of humor, they forged ahead. There was much fun and happiness in the homes in which my parents grew up.”

Much fun and happiness. What a wonderful gift for the family. I can look back and appreciate Louisa’s gifts to us of enjoying flowers, music, church, concerts, nature, and gardens, while learning self-discipline to create those opportunities. May we all have a sense of humor and find fun and happiness in our lives!

To become a citizen in the 1840s: The passenger list, if one came by ship, was furnished to U.S. Customs officials. One could work, own property, and live in this country without becoming a citizen. To become a citizen, one went to a local court, declared the intention to become a citizen of the United States and to renounce allegiance to the former country. Make a sworn statement before a judge, sign a document. Wait 5 years, then reappear with two witnesses who would swear that the person had been a good resident and was worthy of becoming a citizen. Take an oath before the judge and be officially declared a citizen. If he was married, his wife automatically became a citizen as well.

We do not know if Wilhelm and Louisa became citizens. I suspect so, as they were well entrenched in the community.

I have seen variations of the German name; all I can say with certainty is we wound up with Rotthouse in the USA.

Children of Louisa and Wilhelm: 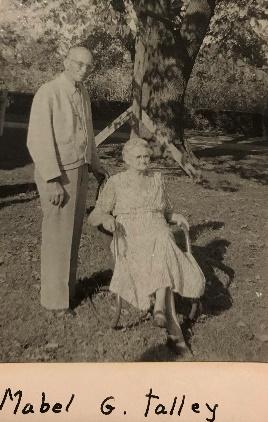 Quotation from Letter of Rachel L. Webster to her daughters, undated, c. 1968

Additional information from letters from Rachel Webster to Miss Newman, 1985.

The wood engraving of the Rotthouse log house was done by Rachel as a high school student and won a prize in a state wide contest. I have a photo of the engraving but have not seen the original. 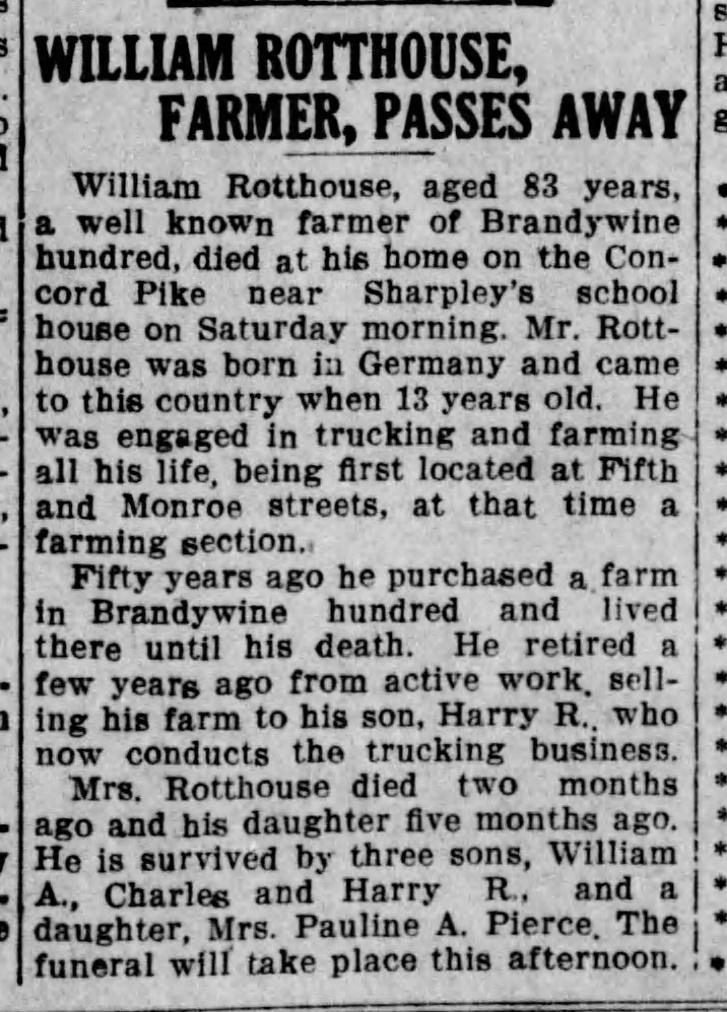 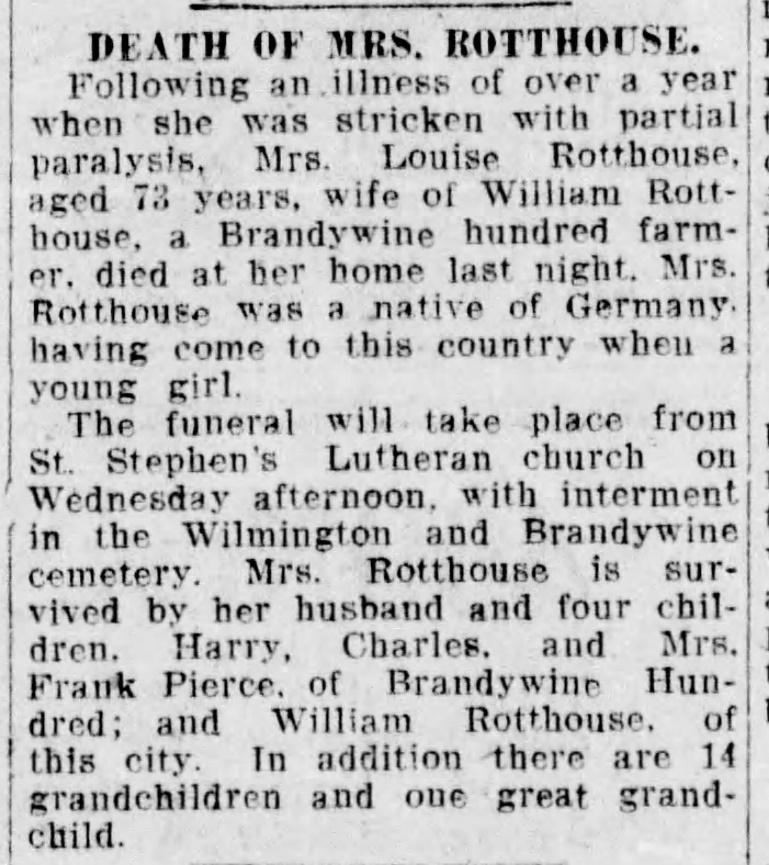 Note: Although the obituary states Mr. Rotthouse was 13 when he came to the United States, he was actually 18. His parents stayed in Germany.

Here is a listing of the different native plants we’ll have for sale this year, along with their ideal gardens and possible uses. Happy Planting!  Crop Plant…

There are a lot of different ways to say it. In A Mood. Cranky. Difficult. Needs A Nap (sign me up, please!). By the end of…

December is the month of dwindling daylight. I understand why so many animals hibernate or semi-hibernate. It feels as if everything is coming to an end.…