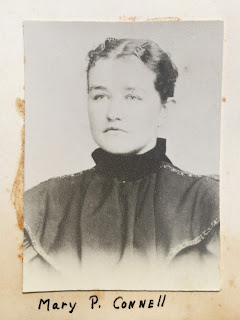 So many family stories are told from the father’s point of view. Particularly in farming.  In my family, I am fortunate to have a long line of strong women who stood in equal partnership with the men in the family and brought highly valued skills to the family and to the business of farming. For Women’s History Month I want to turn the spotlight on Mary Pauline Connell Webster, my great-grandmother.

Born March 4, 1872, in Ashland, Delaware, to Charles Barington Connell (1846-1916) and Emma Evans Bradford (1851-1903), Mary Pauline Connell arrived in a time of great change.  The Connells were farmers and had seven children, two boys and five girls. Mary Pauline’s paternal grandparents emigrated from Ireland in the early 1840s (potato famine drove this migration).  The second oldest of seven, Mary Pauline worked from a young age on her family’s farm.

The year she was born, the Metropolitan Museum of Art opened its doors and Yellowstone became the first national park in the world. Jules Verne wrote “Around the World in Eighty Days” and Ulysses S. Grant was re-elected as President. Almost half of the country worked on a farm. Kerosene lamps provided light and fireplaces provided warmth.  Grasshopper plagues in the west and an economic depression throughout the country overshadowed the 1870s.  The country’s population was about 38 million. By 1890, the population was about 63 million, and farmers were about 43% of the labor force.

The Connells were fairly isolated, as were most farm families. No radios, telephones, newspapers, nor mail reached the rural areas. Going to the big city of Wilmington (population about 62,000 in 1890) for market days helped them catch up on news and meet people. The Connell family lived near Brackinville, a hamlet in 1870, named after William Brackin and his hotel, the area now designated part of Hockessin.

It was at the King Street farmers market that the feisty Mary Pauline first saw John Webster.  It would have taken her family several hours to get to the market by wagon, but this was closer than going to Philadelphia to sell produce. Mary Pauline would shell peas and toss some at that handsome farmer in the next booth to get his attention.

When John Webster went courting, he rode his horse over streams and hills to get there. Sometimes he stayed overnight because of the distance. Only 11 miles away, but on horseback that translates to over 2 hours each way, depending on weather.

During a time when young women were married at 16 or 18 or 20, Miss Connell was an old maid at 25. John, at 34, was also “old” to be getting married for the first time. Apparently, they were equal in stubbornness and determination.

John attended Siloam Methodist Episcopal Church on Faulk Road, and persuaded the minister, Rev. J. W. Tyndall, to come to the Connell’s home on Christmas Day, 1897, to marry them.

Mary Pauline worked in the field to harvest crops along with her husband.  She had a lean-to for a kitchen, a large fireplace and a small bake oven in the wall next to the fireplace. No indoor plumbing yet. 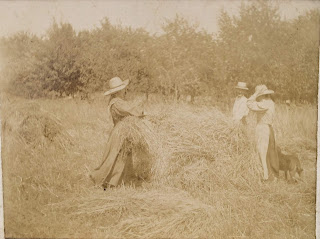 Mary Pauline was close enough to her older sister to name her first daughter, Lillian, after her. Her second child in July 1901 a boy, was named after his father, John Coleman Webster. This was a scary time for infants—diphtheria, measles, or whooping cough killed many children each year. An outbreak of smallpox in 1902 and a flu epidemic in 1903 wreaked havoc on the population. Mary Pauline’s mother died in 1903 at the age of 52, possibly a flu victim. Mary Pauline was determined to do the best that she possibly could, at a time when there were few aids for sick children, and she nursed that baby for two and a half years to protect him as much as possible.

I try to imagine the determination it took for Mary P to send her daughter to the University of Pennsylvania in 1915. A girl. A farm girl. Going to college. Mary P and her husband, John, were both educated in one-room schoolhouses, and then were self-educated in the School of Life. They saw the merit of a college education for their daughter. Lillian’s brother, John Webster, Jr., always bragged about how smart his sister was. What a lovely heritage–to come from a family that valued the girls as much as the boys. Lillian went on to be a full-time teacher and married a university professor.

In 1908 Henry Ford launched production of the Model T. In a few years, the Websters added a Model T to their household. Radio broadcasts starting in 1921, coupled with a car, lessened the isolation of the farm family. Faulk Road (later spelled Foulk Road) was still a dirt road. Farms now could have mail delivered.

In 1931, Mary P’s husband was killed in a farm accident, when John was thrown by a startled horse pulling a cultivator. He was 68. She decided she was ready to turn the planting, reaping, churning, baking, harvesting, over to her son, John, and his wife, Rachel. John Jr. built a cottage onto the main house so that Mary P had her privacy.

Accustomed to a busy life, Mary P looked around for something to do. She had always loved art and had dreamed of having time for drawing and painting. She started taking painting classes at the Wilmington Art Center. And thrived. She stopped lessons after a few months and began painting on her own and with a group of painters called The Studio Group. Mary P decided to treat herself to a trip to Vienna in 1936 to study art and took one of her granddaughters with her. Unfortunately, the Nazi buildup cut short their trip, so they returned to England and sailed home, encountering two hurricanes at sea on the return trip.

Mary P started exhibiting her work and started winning prizes. She went to Florida for the winter and painted there. Her work was on display at the Ringling Art Exhibit in Sarasota, Florida, and various shows in Wilmington, Delaware.    Her work was collected by institutions, including the Delaware Art Center and the Wilmington Society for Fine Arts, as well as individuals. She decided to “retire” to Florida, and spent most of the year painting and enjoying the sunshine. Her daughter had a home nearby, and her son started coming every winter.

When Mary Pauline died in 1957, cars were everywhere, television was in most homes, newspapers were delivered, mail was finally delivered everywhere, party-line telephones were the norm, movies were common, and one could travel easily by train or by plane. Farmers were 12% of the labor force, on their way to a becoming rare segment of the 150 million people in the United States. Mary P adapted to each of these developments and embraced them for the benefit of her family and herself. She was a strong woman who left us a legacy of family, confidence, integrity, talent. She showed her family how to seek out opportunities and find fulfillment in all that you do. Mary Pauline Connell Webster lived her life with courage and integrity—every day, month, and year. Her history is an integral part of our story and why we can be here today. 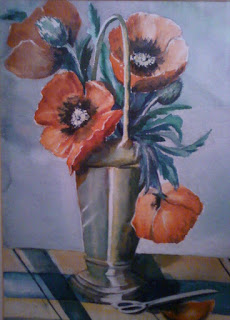 Hello and welcome! Each Monday we post what will be in the CSA shares. All CSA posts are in the CSA category. And then there will be some history, some current happenings, and some learning type posts. So pull up a mouse or a touch screen, and enjoy!