We have a long history of going to Farmers Markets, primarily the King Street Farmers Market in Wilmington, Delaware. Generations of Websters, Connells, Talleys, and Rotthouses have loaded produce into wagons or trucks to take to the market 2 or more times each week.

John Webster took truckloads of produce in season. A truckload of cabbage: in the Depression, everyone made soup. A load of lilacs in May—and those sold, also. Peaches in the summer, apples in the fall. Rachel Webster made sausage and cottage cheese, as she had learned from her mother.

John Webster continued going to the King Street market into the 1950s. By then he was ready to semi-retire, and the wrangling over the market had become ugly. By 1958, the market was labelled an obstruction and a nuisance. 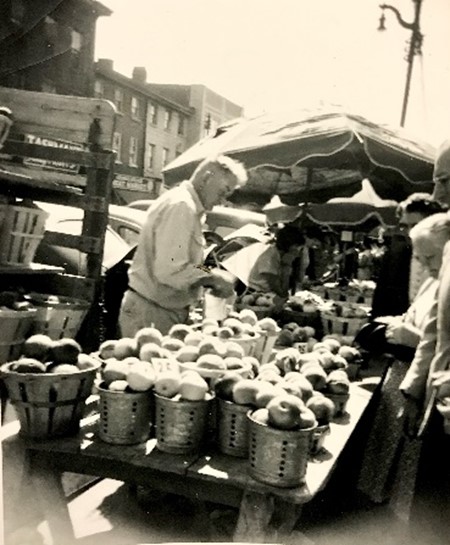 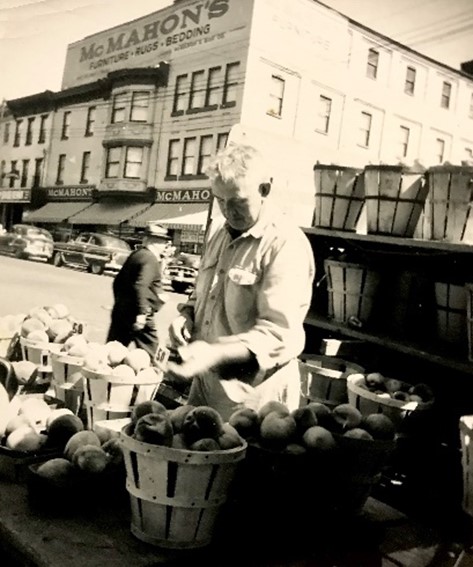 The King Street Market stretched from Front Street to 10th Street, with over 100 farmers coming from all directions. The Connells came from Ashland, the Talleys from Naamans Road, the Rotthouses from Concord Pike, and the Websters from Faulk Road. There was a flower market the next street over, and Wilhelm Rotthouse sold flowers there while his wife sold vegetables and cream cheese across the street from the Webster stand at Sixth and Market.

The Connell’s stand must have been close by, because Mary P. would throw empty pea pods at John Sr. to get his attention when it wasn’t busy. And we have to think John Jr. and the lovely girl at the Rotthouse stand chatted at times. 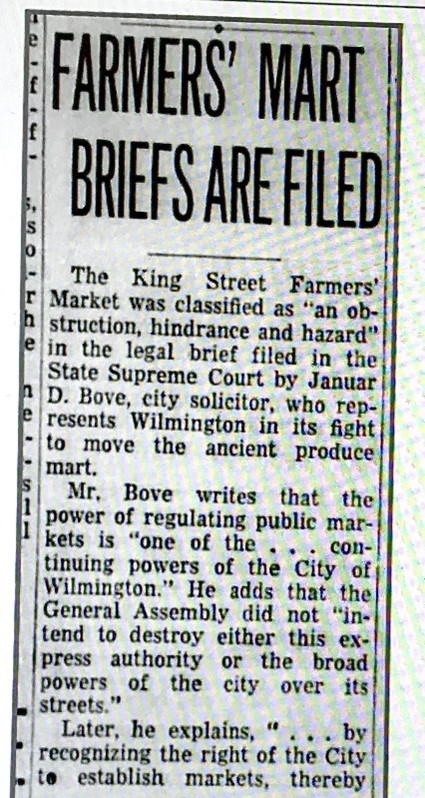 The state legislature had passed a law at some point in the mid 19th c. establishing the farmers market on King Street. At one point in 1884 they noted that the farmers were too busy to always get there twice each week in May.

The Streets and Sewer Commission of Wilmington was in charge of the market and provided a clerk to supervise. Farmers paid to have an annual license, and the market ran year-round. If you didn’t have produce, or the weather was awful, you did not go. It was supposed to be a growers only market.

As early as 1923, there were rumblings about moving the market, since it obstructed traffic on market days. Automobiles by now were common on the streets, and Wilmington thought doing everything to ease the way for cars was the way to go. By the 1950s, there were charges of “hucksters” who bought from farmers and brought in product and lots of rumblings about moving the market. Since there was a state law establishing the market, the city was limited in what it could do.

The newspaper began writing about the market in derogatory terms, calling it a mart or bazaar, deriding its usefulness in bringing food to people.

Every few years, more rumblings would rise to the surface and the idea of moving the market would gain some followers. In the early 1970s, there were still over 90 vendors at the market, covering six blocks. By now, the idea of a pedestrian mall on Market Street gained support, and the King Street market was seen as detracting from this salvation of downtown shopping.

Eventually, Market Street was turned into a pedestrian mall. Then re-opened. The market was moved…and died. At one point it was on Orange Street, then Rodney Square. Customers quit buying, farmers quit coming. By 1990, people begged to bring the market back. Downtown needed people to come and boost the shopping district, and perhaps a farmer’s market could do that.

The Department of Agriculture begged me to try a downtown farmers market as they were trying to revive the market. I tried it. It was pathetic. It did not generate enough in sales to pay for the time there, let alone the packing up and cost of growing. But a different market in Little Italy did great—the first year. The second year, it bombed.

That is when I reached out to the Food Trust about doing a market. They slotted me into a new market at Fitler Square on Saturdays in Philadelphia.

The customers at Fitler, who had this new market in their neighborhood of 2 weeks, were ecstatic. They came, they bought, they told their neighbors. And the market grew.

When another market started just a few blocks away, on Wednesday afternoons, I went there also. Eventually we were the only farmer there! It was not as busy as Saturday at Fitler, but did well enough.

After nearly 20 years, I was tired. The home market had grown dramatically, and it was time for a change. Reluctantly we said good bye to our friends in Philadelphia who had supported us through the years. 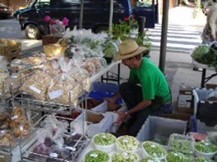 We still go to Philadelphia to deliver CSAs, and many of our customers keep getting produce through that venue.

The King Street farmers market was a major part of the city’s life for over 150 years. Farmers always listed their participation in the market in obituaries. It was a marker of distinction for them, even though the city administration came to see the market as non-contributory to the city, or even a negative aspect. They were wrong, as they found out to their great regret. Is it possible to establish a true farmers market in Wilmington again? Maybe.

Will we go to farmers markets again? I won’t rule it out! There might come a time when it is the right fit for what we want to accomplish. Until then, our farm market on Foulk Road is open.